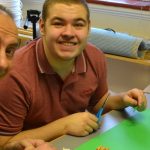 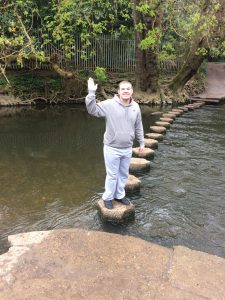 When 22-year-old Ben first arrived at The Grange to join in Skills & Activities sessions, he found it tough to be in a group and just wanted to be on his own watching films online or researching topics. He has autism and can get very anxious at times and very tired.

‘We realised we had to build up Ben’s confidence and trust in the team,’ says Support Worker, Peter Christie, ‘so we made sure he was always with one of a small number of support workers so that he could get to know us well.’

The team that works regularly one-to-one with Ben includes John Newman, Helen Soutter and Clare Watters and all agree he is making great progress.

‘John coined the term “Bencyclopaedia”, says Clare, ‘and we’re all helping to build up this amazing document. Every time there’s a word or phrase Ben doesn’t know, we look it up online and add the explanation to the Bencyclopaedia. We’ve made entries on everything from sanitation to the Romans.’

Researching topics on the computer is Ben’s comfort zone and at first he would sit at a PC in a separate room with a one-to-one support worker. Now he is spending less time there and is joining in with the creative arts classes and IT groups. Frequent trips out to the library, the park and other places of interest also help make sure there’s time away from the computer.

I like The Grange, it’s not college or school and I can be like a grown up.
Ben, Skills and Activities Service user 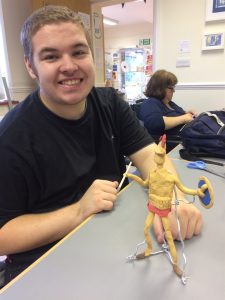 ‘We’re gradually getting Ben to try new foods other than chocolate,’ says Clare. I challenged him to try eating eggs at home and in return I accepted a challenge from him. I watched a zombie film called “Warm Bodies”!’

‘I also tried a blackberry,’ says Ben, ‘I spat it out but at least I tried it.’

Ben has discovered he enjoys painting. Before, he wondered why anyone wanted to do it. ‘We introduced him to watercolourpencils,’ says Clare, ‘and now he’s hooked.

‘The key to making progress is to build up a relationship with the right support worker team,’ says Clare. ‘I’m a special needs teacher with experience of autism which helps us get on so well. Ben feels he can tell us all when he is tired or anxious and needs a break.’

There’s still some work to do before Ben can join groups without one-to-one support but he is well on the way. 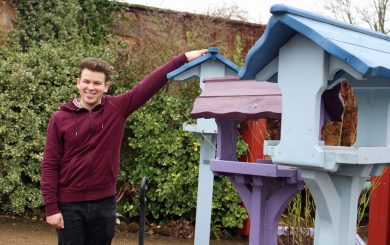 Are you ready to Big Garden Birdwatch? 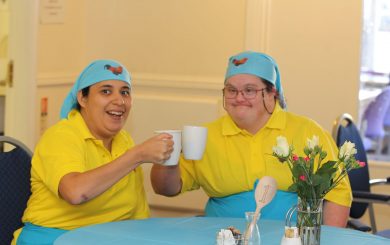 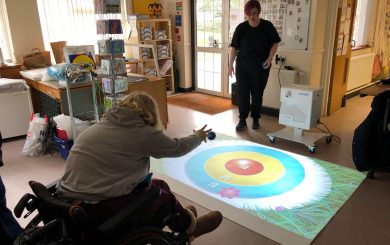 Magic Interactive Table
Skip to content
We use cookies to ensure that we give you the best experience on our website. If you continue to use this site we will assume that you are happy with it.OkPrivacy policy